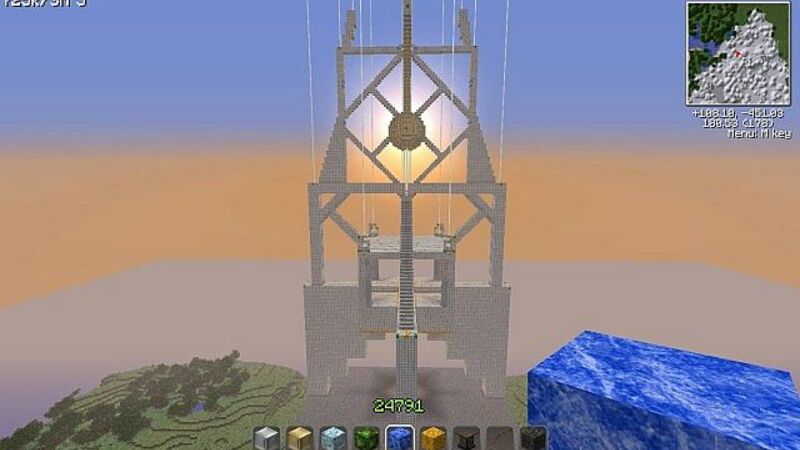 RubberVoltz is the third longest running Voltz server in the world! We are an SMP, PvP, griefing and raiding Voltz server with custom content, patched bugs and a growing community with over 25,000 unique players. After running the Voltz modpack for over 4 years (since 3/19/13) we are officially the second longest running Voltz server in the world! Even through all that, we are still constantly growing as well as developing completely new and interesting content and plugins for the server. Custom made lag prevention systems keep the server running at it's peek and high end hardware combined with fast network speeds destroy any traces of lag!

After extensive bug patching we have been able to unban or fix all the bugs/problems with red matter, oxygen sealers, mechanical pipes, pressurized tubes, universal cables, oxygen collectors, radar stations, microblocks, explosives, trackers, antiballistic missiles, cluster missiles, missile modules, moon dungeons, moon buggies, parachests, landers, vibration catalysts, entropy accelerators, electric chests, electric bows, robits, matter cannons, ME crafting terminals, liquid routers, power armor, plasma cannons, lux capacitors, force field projectors, interdiction matrixes, conveyor belts, particle accelerators, atomic assemblers, the sponge module, the anti-personnel module, fulmination generators, gas tanks, copper wires, and much more! We have also added many commands into the patches such /dimensiontp which allows you to travel to the moon and space stations easily, or /ssinvites which displays a list of everyone with access to your space station. We spend loads of time in order to provide all our players with an unrestricted, fully functional Voltz game play experience. We even go as far as we can to fix client side problems! Placing fuel/oil in a dynamic tank or putting parachests next to real chests will no longer put you into an endless crash loop! Feel free to play however you want to play! Hop on the best Voltz server now!

sentiment_very_satisfied
I do like the server, I've racked about 22 hours on the server however when i logged on i found out i had been jailed for no reason, my in game name is InquisitorMarcus.
Posted 8th Nov 2017

sentiment_very_satisfied
I loved that I could use all the explosives and most of the people who play on this server are very friendly!!!
Posted 24th Jun 2017

sentiment_very_dissatisfied
Worst server ever!!! Do NOT join!! Spawn looks like a 5 year old made it and also they review there own server ..... as you can clearly see in this link that they have done it twice with the same name http://prntscr.com/dxapix
Posted 18th Jan 2017

sentiment_very_satisfied
This server is super fun. It has wonderful players online and a kind server owner. In general its a good environment to play on. It Has a nice spawn and a good shop. 10/10 server come join!
Posted 26th Nov 2016

sentiment_very_dissatisfied
Worst server even when your (enderchest) gets fucking cleared. This server was great now it sucks ass
Posted 24th Nov 2016

sentiment_very_satisfied
Super epic and everyone is nice and the chatmod jacko is a awesome guy. The owner is aweome and epicly nice and kind the only problem about the server is that we need a bit more staff. but apart from that everything is amazing!

sentiment_very_satisfied
Best server nothing banned no bugs. Nice staff Friendly players no dupers no hackers no nazi's owner is awesome but chat mods are dumb and need to go to hell
Posted 12th Nov 2016

sentiment_very_satisfied
This server is awesome! The staff are so nice!
Posted 12th Nov 2016

sentiment_very_satisfied
This server is the best Votz server I played on, the staff are amazing, and most bugs have been fixed.
Posted 7th Aug 2016

sentiment_very_dissatisfied
Ive needed help on the server for four days and still cant find anybody to help me!
Posted 7th Aug 2016

sentiment_satisfied
This server has little to no lag, there are factions willing to take in new players, there are usually no crashes and if so the staff get it back up quick, the owner actually talks in chat, you can use space stations and you can blow all the people up who doesn't enjoy that.
Posted 25th Jul 2016

sentiment_very_satisfied
Amazing cause it was easy to do stuff.
Posted 25th Jul 2016

sentiment_very_satisfied
Great server, but since it's old there aren't as many people on, but staff is pretty helpful so far! If there are any ways, I'd say find a way to promote the server or so.
Posted 13th Jul 2016

sentiment_very_satisfied
We are the second longest running Voltz server to date, have patched nearly every single bug in the modpack, and fully support Minecraft username changes. Numerous optimizations have been made to our customized mods and server code, but if you ever experience lag, notify a staff member and the source will be found and recoded for better performance. We listen seriously to all suggestions players have, and are constantly looking for ways to improve the server.
Posted 8th Jul 2016

sentiment_very_satisfied
I like this server because, well, everyone on it is friendly, it has great staff (looking at you rage and Kme), up most of the time, great fun, nearly no banned items, and most people have fun playing this server, and those who dont, go kys
Posted 7th Jul 2016